I didn’t think it was strange at the time, but as I write this now, I guess it didn’t make much sense to wear a straw hat indoors to walk the mall.

One of my closest friends had purchased a kiosk. She owned two large machines that gave patrons water massages while they listened to music piped in through a headset.

The concept was ingenious and the massage powerful. The idea of having a water massage without getting wet drew many curious people to our kiosk.

Working at a kiosk also drew a lot of other attention.

It put you right in the middle of all of the action, the crowds of people, and front and center in the public eye.

The were no doors to close, no walls to protect you and no option to leave your location.

We called them the “Mall Walkers.”

They were there every morning with their sneakers and water bottles, to walk the mile of mall flooring to get their daily exercise.

“My name is Harry.” He said with a smile.

“Nice to meet you, Harry.” I replied.

That’s how it all began.

As simple as a greeting.

At first Harry would stop by daily to say hello and make small talk.

“How are you doing today?”

Then his visits become longer and more frequent.

His conversation, more questions about me than the small talk of the past weeks.

“So do you like sushi?” He asked me one day.

Harry began walking at the mall more than once a day. His walks had become scheduled around my shifts at the kiosk… although it took me a while to figure that out.

One day Harry brought me sushi for lunch. It was a nice gesture but he refused to take the money that I offered him to pay for it.

My friend that owned the kiosk was starting to become concerned.

“He’s just a lonely old man.” I said, naive to the danger that was about to ensue.

I started to dread seeing the top of that straw hat sticking out in the distance above the mall crowd.

Harry started to come to the kiosk for water massages.

Now he was a paying customer and that presented a new problem instituting boundaries with him.

He started to bring me random things that we may have mentioned during our conversation when he frequented the kiosk.

Photos of some roses that he made out of bent metal.

A bottle of Pinot Grigio.

I refused every gift, but after becoming visibly angry with me, he left them anyway.

One day, an employee from a store near our kiosk approached me.

“Erin, that guy with the straw hat is circling the parking lot trying to find your car. He asked me what kind of car you drive. I didn’t tell him.”

“Thanks for the heads up.” I said, feeling more uneasy about Harry and not knowing what I was going to do.

Harry started coming to the kiosk for water massages three times a day.

He was a paying customer, but no one needs three massages a day.

He would make excuses about a new ache or injury and linger at the kiosk both before and after the massage.

One night after the mall closed, he tried to follow me home.

I stared at the headlights in my rear view mirror as the vehicle behind me mimicked my every turn… Is it my imagination, or is the driver wearing a straw hat?

I finally lost him in traffic but my heart continued to pound.

Okay, my friend that owned the kiosk was right.

We had to do something.

When Harry showed up saying that he wanted to meet my parents and walk off into the sunset with me, that was about all I could take.

“Harry, you have to leave me alone!” I said firmly. “You can not talk to me or come to this kiosk anymore.”

“Ya know, I pleasure myself thinking about you every night.” He said.

“That’s it! Get away from me! I’m calling mall security!” I screamed.

Mall security told us it was our right to ban Harry from being a customer. They told Harry that he was no longer allowed to frequent our business or to come near it at all, for that matter.

He began writing me letters and following me as I walked through the mall on my way to work.

I parked my car in different locations each day, making sure that I didn’t enter or leave the mall through the same door.

Harry would hang around the location of the kiosk and watch through the glass windows of nearby stores.

In the end, Harry approached the kiosk with a bouquet of flowers and a bottle of wine.

We contacted mall security and they escorted me to the safety of their office.

Harry ran through the mall after us yelling, “Please, I just want to talk to her and give her these flowers… and this bottle of pinot grigio…”

Two security guards grabbed Harry by the arms and took him out of the mall.

I never saw Harry again, but I continued to be on the lookout for a straw hat…

In fact, to this day, when I see a man wearing a straw hat, my anxiety level skyrockets as adrenaline pulses through my body.

Even with time, that hasn’t changed.

Join me for Part 2: Tales From The Mall Kiosk, I see Dead People 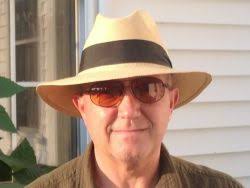 27 thoughts on “Part 1: Tales From The Mall Kiosk, The Stalker”